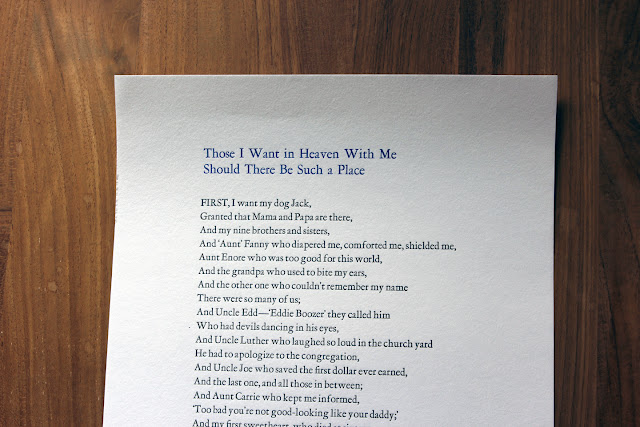 Today's poem is a very special one. It was sent up to us from the Pinstripe Pulpit, who is now keeping shop in the county where I grew up. He'd letter pressed it years back and it is signed by the author (and poet laureate of Kentucky), the late James Still. This one will make you choke up, I promise. Without further ado.

First I want my dog Jack,
Granted that Mama and Papa are there,
And my nine brothers and sisters,
And “Aunt” Fanny who diapered me, comforted me, shielded me,
Aunt Enore who was too good for this world,
And the grandpa who used to bite my ears,
And the other one who couldn’t remember my name—
There were so many of us;
And Uncle Edd—“Eddie Boozer” they called him—
Who had devils dancing in his eyes,
And Uncle Luther who laughed so loud in the churchyard
He had to apologize to the congregation,
And Uncle Joe who saved the first dollar he ever earned,
And the last one, and all those in between;
And Aunt Carrie who kept me informed:
“Too bad you’re not good looking like your daddy”;
And my first sweetheart, who died at sixteen,
Before she got around to saying “Yes”;

I want my dog Jack nipping at my heels,
Who was my boon companion,
Suddenly gone when I was six;
And I want Rusty, my ginger pony,
Who took me on my first journey—
Not far, yet far enough for the time.

I want the play fellows of my youth
Who gathered bumblebees in bottles,
Erected flutter mills by streams,
Flew kites nearly to heaven,
And who before me saw God.

Be with me there. 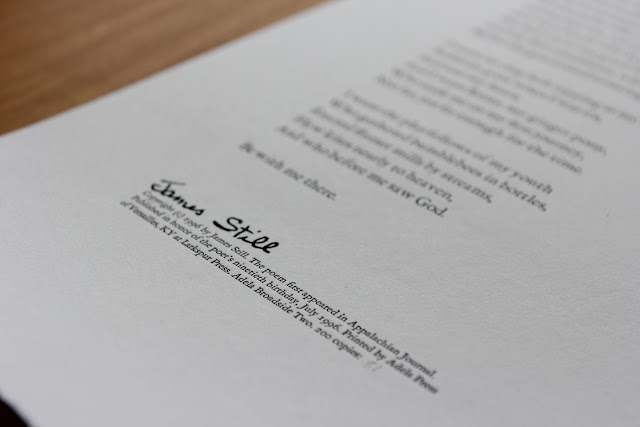