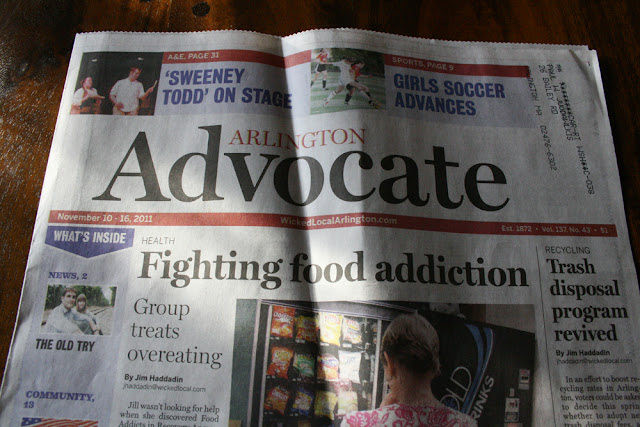 In this age where you can make blogs all around the world, it really is something to make the local paper. 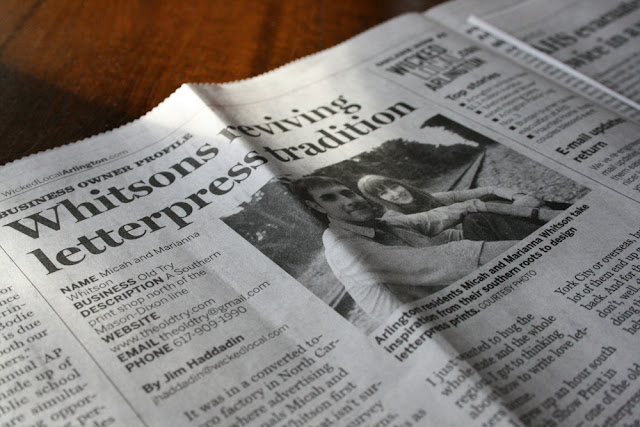 Our neighbors saved a paper copy and gave it to us, cause when it went live on the internet, I didn't even know we had a real printed paper in the town.

It was in a converted tobacco factory in North Carolina where advertising professionals Micah and Marianna Whitson first met — a fact that isn’t surprising when you survey their letterpress designs.

Micah currently works as a graphic designer and Marianna is an image librarian. Individually, the two have also worked as creative experts in London, done retail sales in Atlanta, led bike tours in Durango, Colo., and performed design work for folks from Kentucky to South Korea.


After resettling near Boston, the Whitsons began designing graphic prints, which draw inspiration from “books, experience, suggestions, Faulkner and memories” to invoke the ethos of the South.

The Whitsons moved to Somerville four years ago and recently relocated to Arlington. They operate an independent letterpress design studio, which is named Old Try, a reference both to the expression “the old college try” and their desire to revive a labor-intensive craft.


Where are you from and how did you get to Arlington?
I'm from a small town in North Alabama, called Athens. It's in what once was the largest cotton-producing county in the state. My lovely wife is from the “City of Oaks,” Raleigh, N.C. We moved up four- -and-a-half-years ago and lived in Somerville for the first three. Since Marianna coaches girls’ lacrosse in the evenings during the season, we moved out to Arlington. And Blue Ribbon Barbecue is here, so it was a no-brainer.

How did you start making prints?
The tornados that ripped through Alabama and North Carolina back in April really weighed heavily in our hearts. Friends from high school lost their houses. Landmarks that I remember from growing up were thrown all over. My family was out of touch for five days. There was no phone service. I watched my county all smashed up from news footage from a helicopter.
And very quickly thereafter, I saw folks who were from the South, but now living in Chicago and New York City start making shirts and prints to raise money for rebuilding. And my heart just about swelled with pride from seeing those other expats do something for their homes. And I just wanted to hug the whole state and the whole region. I got to thinking about how to write love letters home.
I grew up an hour south of Hatch Show Print in Nashville — one of the oldest working letterpress print shops in the country — and I always just loved them and their letterpress aesthetic. So I went around searching for letterpresses in Boston. Turns out there are three of them in and around our old neighborhood in Somerville. We've used each one of them so far.

Why did you name the business Old Try?
When the two of us started talking we didn't have any idea of how this thing would go over. And we thought, “Why not give her the old college try?” It had a nice ring to it. And being a visual nerd, it's quick and simple, stacks nicely and has balance. So, no big lighting bolts — just happened to stumble across it.

What is the aesthetic of the south?
I don't think there's just one look, but of course, everyone will say the same thing about where they are from. But the way I interpret it is that it's practical, simple and honest. It's about having to do more with less. And that's why I love using old wood and lead type with letterpress. You can only do what you can do. You want a script? Well, we don't have a script. You want the E to be bigger? Well, we only got one E, and it's that size. You have to slow down, respect the limits of resources and work within that box.
It's so refreshing to work that way and leave the realm of digital design, where I can do just about anything I want, and to just strip away color and words and images until we get to the very heart of what it is about a place.

How is your work routed in the culture of the south?
I just think folks identify with where they come from. We're Southern. As much as we may try to think we're something else based on where we live, all the roads here lead that way. It's where family is and where memories are and where friends are raising their babies. They move to New York City or overseas, but a lot of them end up going back. And for those who don't, well, that's why we're doing this. We think we're helping connect people to place.
And that's what it's about. Whether you grew up in Massachusetts or Maine or Louisiana, there's a place in your past that helped shape you, for good or bad. And we've found the longer we're away, the more refined and the more pure and the better the memories become. And we miss it. And so we do it.
Are we going to move back? Probably at some point, but not now.
I think Curtis Wilkie, the writer and former Boston Globe reporter, says it really well in “Dixie”: "I was determined to join a band of expatriates on the East Coast, a group (Willie) Morris described as 'a genuine set of exiles, almost in the European sense: alienated from home yet forever drawn back to it, seeking some form of personal liberty elsewhere yet obsessed with the texture and the complexity of the place from which they had departed as few Americans from other states ever could be.' "

Who are your customers?
All over — a lot of folks in California, southern expats, and letterpress fans. People with the name Dixie.

Describe your production methods.
We have a big old notebook of ideas … and we take the designs to the guys at Union Press, the letterpress print shop in Union Square in Somerville. We find type that works, based on what they have in their shop, then talk about the images. Anything that isn't type is hand-carved by the printmaker, so we discuss how to get images to read correctly. Then we check proofs and run off 100 prints. It's a very time-intensive, impractical way of doing things, which is just what we're into.

Do you make custom prints for customers?
No sir. For the first time in our lives we're getting to do exactly what we want and not having to answer to clients. So long as the two of us like it, it will be available to hang on your wall at some point in the future.