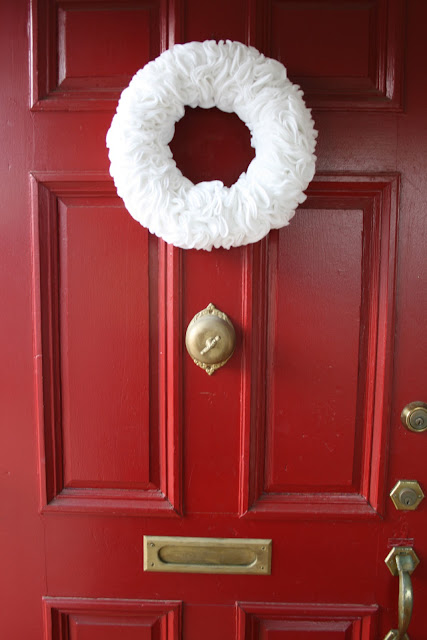 This wreath has been pinned on my Pinterest board for quite some time, so I was excited to actually make it.  I originally found it on Design*Sponge and thought it looked really cute.

Since we're making an effort to spend more time with people this year (and less on gifts), I thought it would be fun to add a new Christmas decoration to our home.  A fun welcome for people when they arrive for dinner (or drinks or a football viewing).


Felt again for this project. The tutorial called for 2.5 yds (!) of felt, but I think I only ended up using about 2 yards.  I guess it depends on how full you want your wreath.  And I had what I thought was a great idea to add some wintry blues to the all-white wreath, which ended up being, as Micah put it, "a little too crafty." And I agreed, so you'll noticed that the blue disappears by the end of the project.

This project was a definitely more expensive than the felt garland, but not crazy; I was able to get the felt on sale, too.  You'll need the felt (2-2.5 yards), pins (enough for each circle which turns out is A LOT!), a 12" styrofoam wreath, scissors, circle template, pencil (I used a disappearing fabric marker) and a scrap of ribbon.  I made it in about 3 sittings, and it seems like it took a really long time, but easy, kind of mindless work. 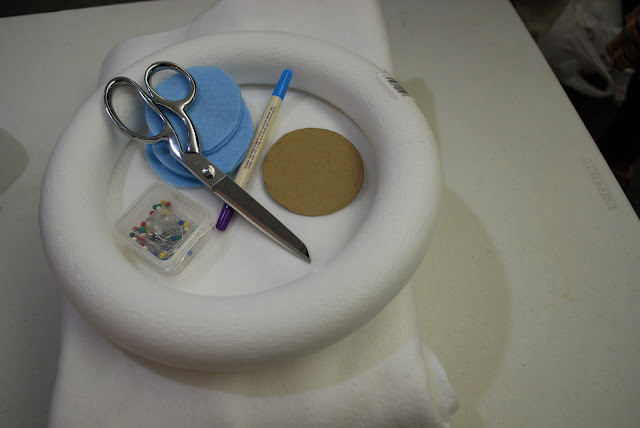 First, I created my circle template out of an empty cereal box. I wanted something more substantial than paper, but not as heavy as cardboard.  I used a random candle stick base to trace a ~3" circle onto the paperboard and then cut it out.  Easy peasy.

After that, it was on to the circle tracing.  I folded my fabric in half so that there'd be 2 pieces for every circle I traced and cut.  I did the tracing several rows at a time and then cut them out.  Traced a few rows and then cut.  It was better for my tired hands to vary it at least a little.  Once it seemed like I had a decent amount - aka towers and towers of wobbling felt circles - I decided to start pinning them onto the wreath.  I didn't want to waste supplies and time and effort cutting out more circles than I needed.  Plus, again, it would give my hands something different to do.

Each circle is folded in half once (to make a semi-circle) and then in half again.  You stick the pin through the bottom corner to make the "rosettes."  I wasn't really sure how to arrange them on the wreath, but I just sort of eyeballed it as I went.  Once I had a batch pinned in, I went back and fluffed them a little, moving and re-arranging where necessary. 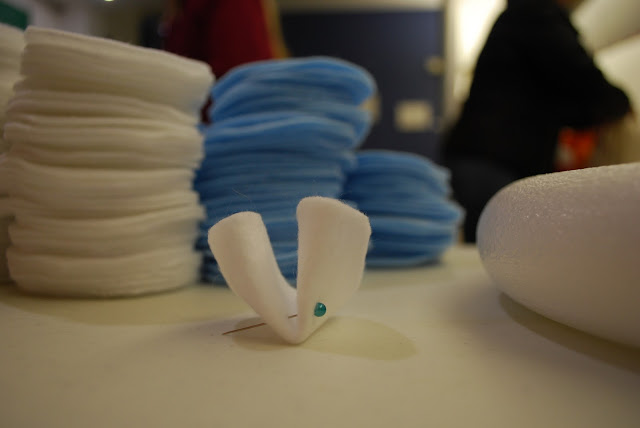 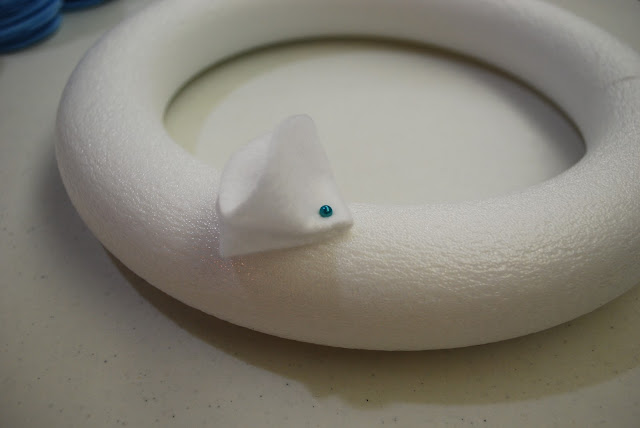 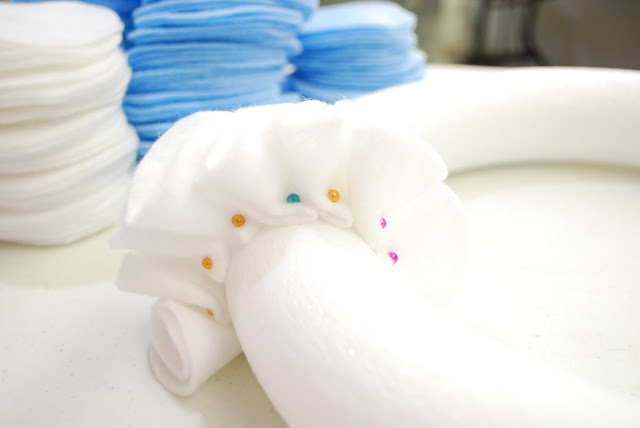 It turns out that the towers and towers of felt circles only covered about half the wreath...back to tracing and cutting and pinning (repeat repeat repeat).  Once I made it all the way around, I gave it a once-over again, fluffing, moving, re-pinning. 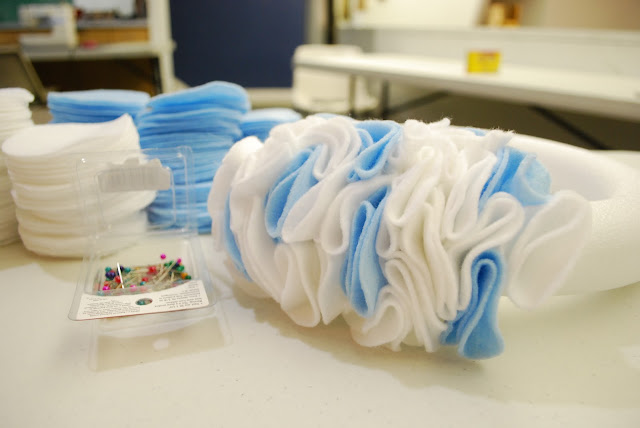 For the hanger, I originally just cut a strip of felt instead of using ribbon, but decided that ribbon would probably be sturdier.  And seeing as the wreath is a snowy white, I didn't want it falling onto our dirty porch.  So I replaced the short felt strip with some scrap ribbon I had leftover from another project (you can't see it so it doesn't matter what color it is - mine is pink!).  One thing I did do was make sure that the 2 pins holding the ribbon into the wreath were angled up when I pushed them into the foam, just in case they were thinking about popping out, it seemed slightly more secure that way. 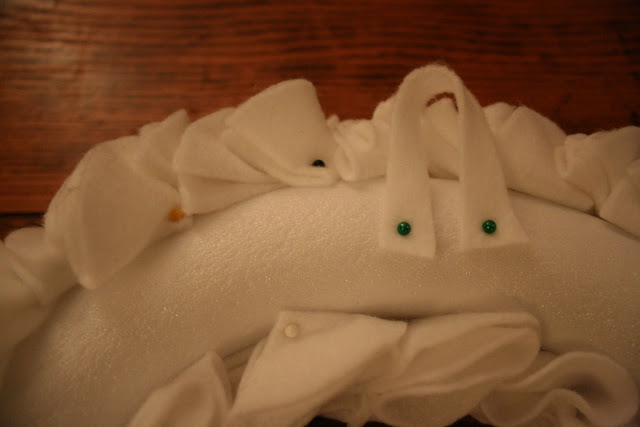 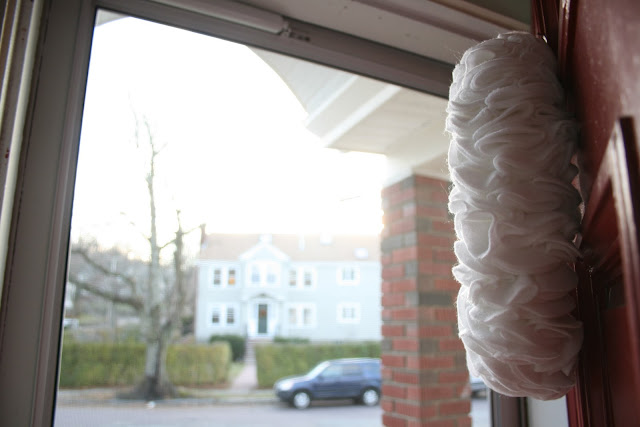 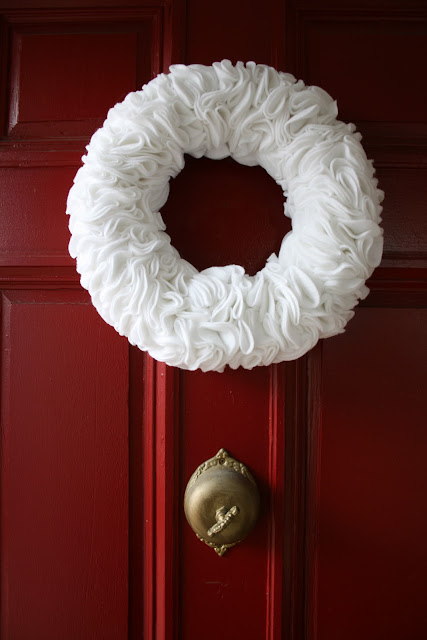 Whew!  Turned out pretty cute if I do say so.  One other thing that I thought would be cool to try is an ombre color shift...but that's probably a little ambitious!