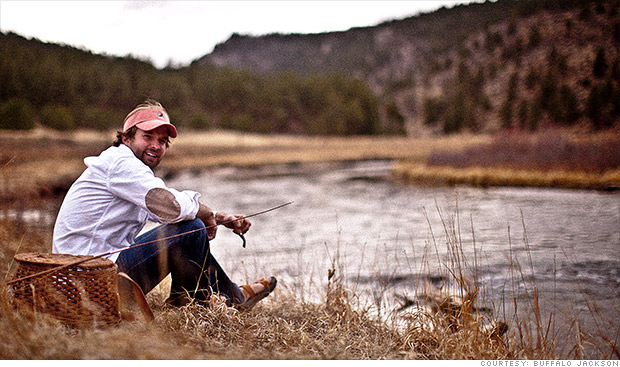 I was just trying to ascertain country of origin for a pair of Buffalo Jackson mocs. Sent an email. Heard back in short order from the founder. Said he was a fan. Flattered, I emailed a thank you. I then spent that money on something else. Prolly pizza and beers. Wish it would've been on this vest.

Fast forward to early 2013. We met up with Xan for breakfast in Charlotte. Which is where Buffalo Jackson is now. Their genesis story is about a man from Tennessee who was seeking God's will, moved West. Worked in the ministry. Started a business, a successful business. The kind of business CNN writes about. But home was calling. So he and the family moved back. To Charlotte. To invite strangers like us out to breakfast.

That was the last day of our Christmas trip, and I left inspired. By Xan. His vision for his company and his direction in life and the way he makes you feel like what you are doing is so much cooler than what he is doing. But it isn't, cause he does really great stuff.

Of course, we kept on talking, and that led to a couple of really great prints that are coming out just today. Two of them, one called Buffalo, one called Jackson. Two prints that celebrate the American West. A couple of prints that will raise some funds that we can send back to the parks. Prints that remind us of those summers we spent out West in college. Or those longer spells. Ones like Xan took.

I'm really pleased with how these things turned out. And I don't figure this is the last time you are going to see us team up. And heck, if you haven't been by now, go check out Buffalo Jackson.