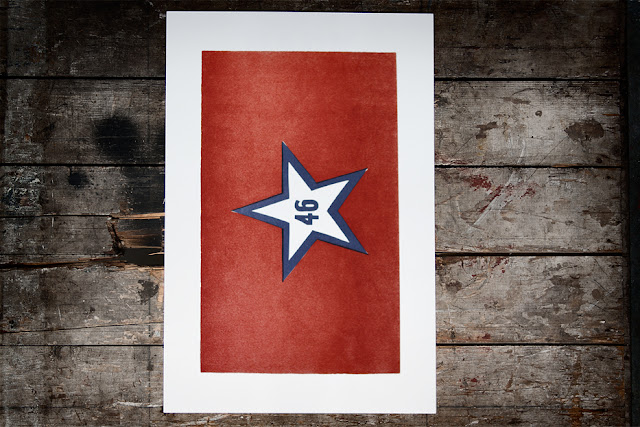 Took a year and a half, but we've now got up a print for Oklahoma. We've called it OK46 and you can find it here.

She's a recreation of the first flag of Oklahoma. A flag that flew from 1911 until 1925. Taken down cause we Americans started getting a little worried about the Russians and communism and thought that anything red would turn our children into bad people, I guess.

The flag was red. Partially cause the stars and strips was red, but moreso because the name of the state comes from the Choctaw okla humma meaning, you guessed it, red people.

Well, I figured my great-grandparents, Florence and Jess, who were red people (Cherokee) living in Oklahoma, might've had a soft spot for the flag of their young adult lives. They've both passed over the last decade, which is a shame. I'd love to've gotten their opinion on the 46 flag.

So there you have it. A flag for Oklahoma from us. Hope y'all like it.