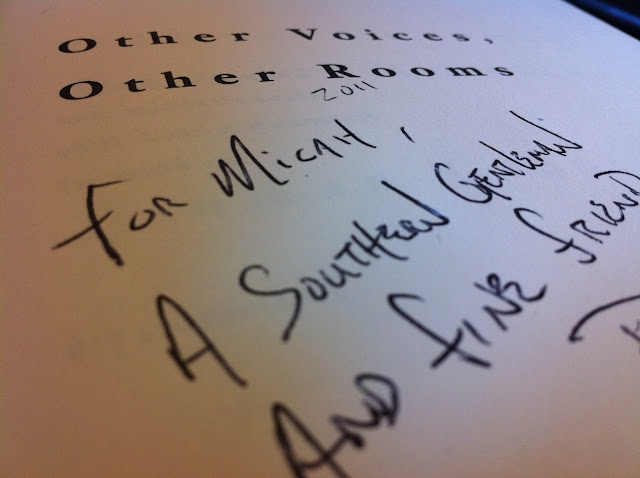 This fellow is from Rochester, NY and his son goes the University of South Carolina and he is really just a wonderful human. He came and gave me a book yesterday. One that he wrote a message inside the front cover of and gave to me. Just as a gift. Just to read. It's Truman Capote's Other Voices, Other Rooms. Who just gives anything anymore? Time? Money? Books? He's a class act.

Well, this fellow, P______, he also sends out a Friday poem. And this Friday's hit in that really deep place. That place of truth and that place of real and of warmth and noise and home.


The air vibrated
with the sound of cicadas
on those hot Missouri nights after sundown
when the grown-ups gathered on the wide back lawn,
sank into their slung-back canvas chairs
tall glasses of iced tea beading in the heat

and we sisters chased fireflies
reaching for them in the dark
admiring their compact black bodies
their orange stripes and seeking antennas
as they crawled to our fingertips
and clicked open into the night air.

In all the days and years that have followed,
I don’t know that I’ve ever experienced
the same utter certainty of the goodness of life
that was as palpable
as the sound of the cicadas on those nights:

my sisters running around with me in the dark,
the murmur of the grown-ups’ voices,
the way reverence mixes with amazement
to see such a small body
emit so much light.

We're actually working on a firefly print now. Fireflies and honey suckle. It will be called Summer.