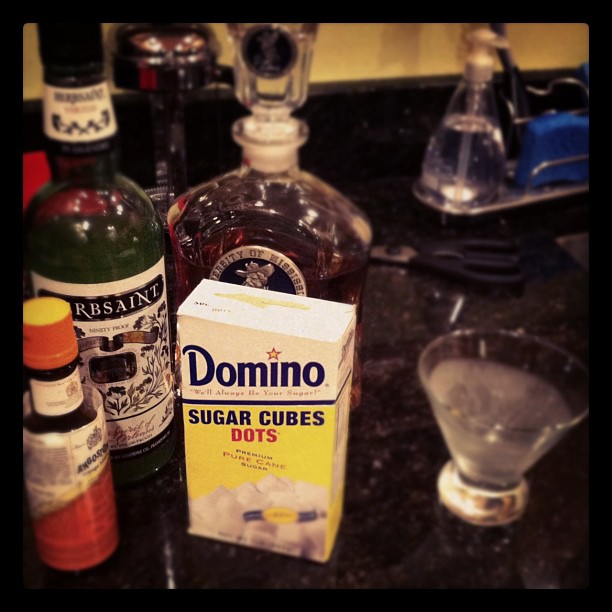 For in case I get egg on my face tonight. Egg goes better with the taste of New Orleans on the tounge.

METHOD
... Pack an Old-Fashioned glass with ice
... In a second Old-Fashioned glass place the sugar cube and add the Peychaud's Bitters to it, then crush the sugar cube
... Add the Bourbon to the second glass containing the bitters and sugar
... Empty the ice from the first glass and coat the glass with the Herbsaint, then discard the remainder
... Empty the whiskey/bitters/sugar mixture from the second glass into the first glass and garnish with lemon peel
... Shout nasty things at the Mississippi State Bulldogs fan-base and their cowbells

In 1838, Antoine Amedie Peychaud, owner of a New Orleans apothecary, treated his friends to brandy toddies of his own recipe, including his "Peychaud's Bitters," made from a secret family recipe. The toddies were made using a double-ended egg cup as a measuring cup or jigger, then known as a "coquetier" (pronounced "ko-k-tay"), from which the word "cocktail" was derived. Thus, the world's first cocktail was born.

In 1933, the Sazerac Cocktail was bottled and marketed by the Sazerac Company of New Orleans. That same year, "Herbsaint," a pastis, was made according to a French recipe; "Herbsaint" was so named for the New Orleans term for wormwood - "Herb Sainte."

In 1940, the Official Sazerac Cocktail recipe was modified to use Herbsaint as the absinthe.