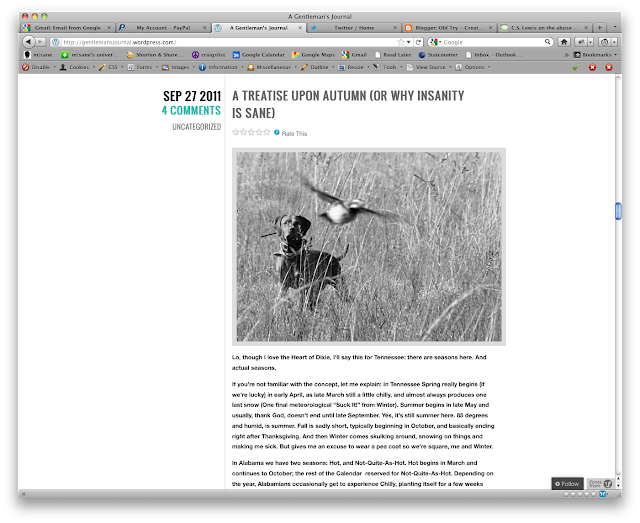 You know, that phrase is so wrought with baggage.

One of my favorite authors, C.S. Lewis, speaks of a gentleman. And I can't hear that word and not think about this:

The word gentleman originally meant something recognisable; one who had a coat of arms and some landed property. When you called someone "a gentleman" you were not paying him a compliment, but merely stating a fact. If you said he was not "a gentleman" you were not insulting him, but giving information. There was no contradiction in saying that John was a liar and a gentleman; any more than there now is in saying that James is a fool and an M.A. But then there came people who said - so rightly, charitably, spiritually, sensitively, so anything but usefully - "Ah but surely the important thing about a gentleman is not the coat of arms and the land, but the behaviour? Surely he is the true gentleman who behaves as a gentleman should? Surely in that sense Edward is far more truly a gentleman than John?" They meant well. To be honourable and courteous and brave is of course a far better thing than to have a coat of arms. But it is not the same thing. Worse still, it is not a thing everyone will agree about. To call a man "a gentleman" in this new, refined sense, becomes, in fact, not a way of giving information about him, but a way of praising him: to deny that he is "a gentleman" becomes simply a way of insulting him. When a word ceases to be a term of description and becomes merely a term of praise, it no longer tells you facts about the object: it only tells you about the speaker's attitude to that object. (A 'nice' meal only means a meal the speaker likes.) A gentleman, once it has been spiritualised and refined out of its old coarse, objective sense, means hardly more than a man whom the speaker likes. As a result, gentleman is now a useless word. We had lots of terms of approval already, so it was not needed for that use; on the other hand if anyone (say, in a historical work) wants to use it in its old sense, he cannot do so without explanations. It has been spoiled for that purpose.

So, apart from my baggage, I think I myself know a gentleman. Now, I've not met him yet, but I think I can get behind just about everything he's into:

I am Ryan, A 25-year-old, A leader of worship, A writer, A musician, A poet, A sinner daily saved by mysterious Grace, A perpetual laugher, A pipe smoker, A bird hunter, A baseball fan (Go Bravo), A native son of Alabama(Roll Tide), A Southerner; through and through, A bow-tie wearer, A proponent of erudition (not to be confused with pretension), A scotch man (Neat, please), A bit old-fashioned, A Theodore Roosevelt admirer, A self-described romantic, A loyal fan (Go Chiefs), A terrible golfer, A proud Star Wars nerd, A backpacker, A sucker for red-velvet cake, A sucker for red-heads.

If it weren't for the age (cruel time!) and my wife not being ginger, I'd think we're the same guy.

Well, Ryan has a great journal and wrote just about the nicest writeup we could ever imagine on us, and we're just real flattered going into the first weekend of October.

We doff our hats to gentleman like this one, and hope to meet many more in the future.